Well, we made it everyone! British summer happened (and is still happening). A record-setting heat wave has made vacationing in Britain feel like a holiday in the south of Spain. Mental health benefits, and existential concerns aside, the warm weather has given us a craving for crisp German wheat beer.

Hefeweizens and other wheat beers have been around for centuries. Since the mid-80s, many craft beer lovers have enjoyed wheat beer styles as a gateway to the entire world of beer. The unfiltered, naturally hazy and sometimes opaque appearance of wheat beers has now proven ahead of its time

Despite this, hefeweizens are not always considered the most exciting or trendy beers. Many in the craft beer community even dare to look down upon the style as too simple.

A brief history of Hefeweizen

The use of wheat in beer brewing goes back nearly a thousand years. The brewing of hefeweizen, also known as weissbier, can be traced back to the early to the mid-15th century in Germany.

You may recall the Bavarian beer purity law of 1516, the Reinheitsgebot. This law restricted brewers to only using water, barley, and hops to make beer.

As the Reinheitsgebot became more widely adopted, legal exceptions would appear. One of these was introduced by the Dukes of Wittelsbach; named Weissbieregal which translates as “the right to brew wheat beer”, it allowed for the inclusion of wheat in brewing. At the time, only one single brewery was allowed to make wheat beer, but this loophole was critical to keeping weissbier alive.

The popularity of wheat beers grew in southern Germany well into the early 19th century. During this time, Germany (along with most of Northern Europe), saw the rise of the dark lager followed by the eruption of pale lagers. 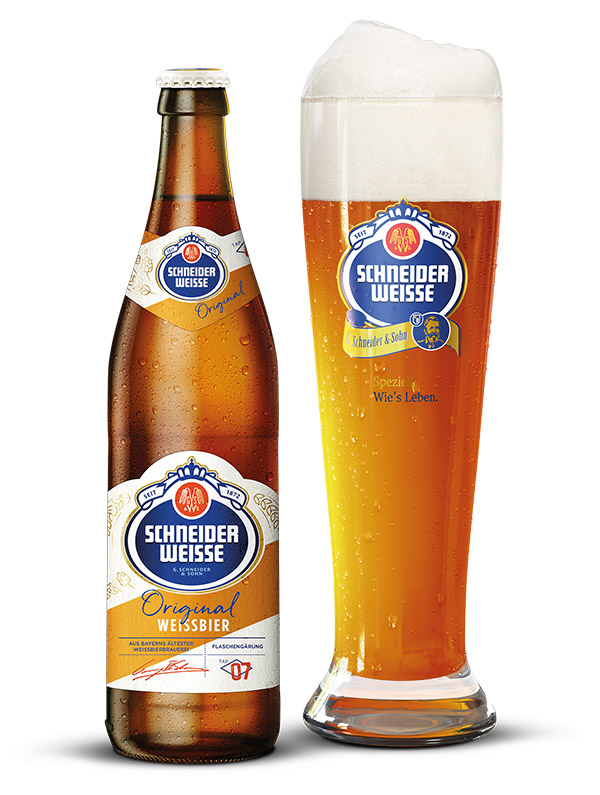 Hefeweizens were on the decline until Georg I. Schneider purchased the brewing rights to make weissbier in 1856. G. Schneider & Sohn would later start the world-renowned Schneider Weisse brewery in 1872–the oldest wheat beer brewing in Munich.

Over the next century, Weizenbier spread up to northern Germany, Europe and then onto the New World.

America Falls in Love with Hefeweizen

America’s brewing history has rich ties to German brewing tradition. History proved that pale or light pilsner would be king; however, many German immigrants brought over the Weissbier. The aftermath of World War I resulted in a national anti-German sentiment which essentially killed off the style in the US.

In 1984, trailblazers Anchor Brewing in San Francisco brewed the first wheat beer in America since prohibition. Anchor Summer Wheat is a delicious treat. It is based on the brewery's house yeast and not a traditional German hefeweizen yeast strain.

Similarly, just a few years later, the Widmer Brothers would follow the same methods of using a clean ale strain to produce their Widmer Hefeweizen. In 1986, the brewery only made two beers but was asked to add a third to their range. Limited by only two fermentors, they decided to brew an unfiltered wheat beer for a quick turnaround.

Herein lies one of the urban legends of early American craft beer. Widmer Hefe became a smash hit with regulars at the Dublin Pub in Portland, Oregon. As it turns out, the pub was serving each pint with a slice of lemon. The brewery applauded the innovation as it enhanced the citrus flavours of the non-traditional Cascade hops used in the boil.

Around the same time, Washington-based Pyramid would begin producing its Wheaten Ale and then its Hefeweizen. Along with Widmer, these wheat beers would be available as six-packs in supermarkets and off-licences throughout the northwest.

By the 90s, wheat beer was available in nearly every brewpub and tap room across the country. Even in less developed beer markets like Salt Lake City, Utah, Uinta’s Golden Spike Hefeweizens and Squatter’s American Wheat Beer became ubiquitous beverages.

During the resurrection of the wheat beer styles, the terms “hefeweizen”, “Weizenbier”, and “weissbier” became thrown around haphazardly. American breweries were taking different approaches to brew a hefeweizen. Many were using their house yeast instead of a Bavarian yeast strain, and many were also using hops in place of traditional German hops.

These led to cleaner tasting and hoppier wheat beers than those made historically in southern Germany. And of course, we can’t forget the slice of lemon/ orange that accompanied every pint!

While appealing to the craft beer neophytes, it also drove many beer nerds away–the slice of citrus was equated to the umbrella in a sugary cocktail. The times are changing within the beer community; however, this was the 1990s, not the 2020s. The direct result of this: wheat beers were labelled as “girlie” (whatever that means).

Fortunately, as beer becomes more inclusive, these stigmas are shrinking–people are freer to drink whatever they want without fear of judgement.

Now to clear some confusion up. Both hefeweizens and witbiers are typically pale unfiltered, highly carbonated beers. But there are plenty of distinct differences between each style. 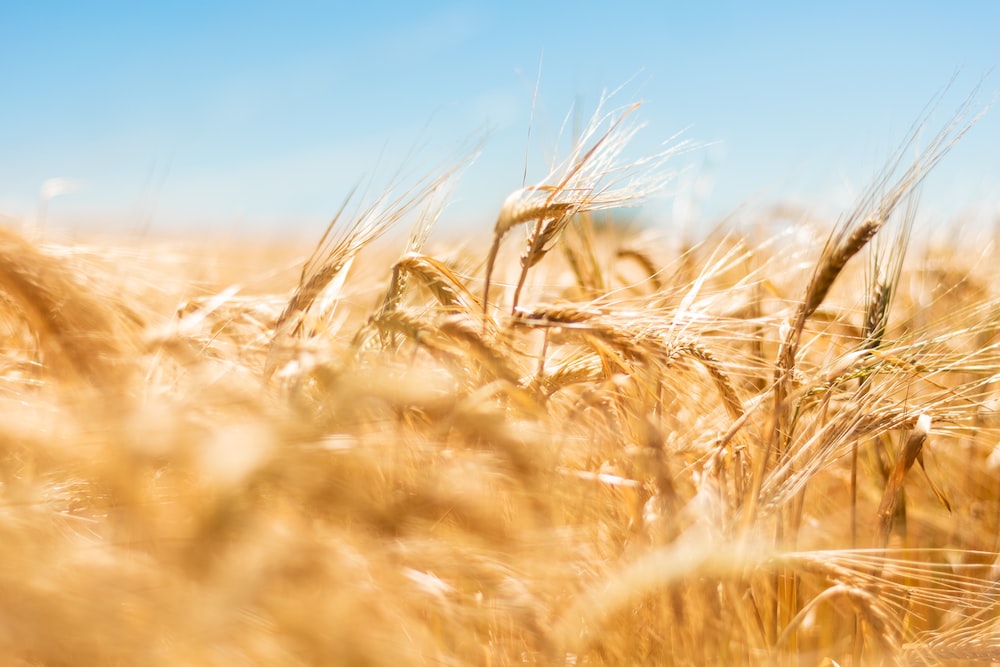 Image of a wheat field courtesy of Pierre Herman

Hefeweizen or weissbier originates from southern Germany (naturally). In Germany, hefeweizens are tied to modern beer purity regulations. This means the beers are made from barley, wheat, hops, water, and a top-fermenting (ale) yeast. German law also states that at least 50% of the grist must be malted wheat.

Funnily enough, they are also allowed to add ferulic acid (also found in barley husks and wheat malt). Most brewers produce/extract this compound at a lower temperature (43 °C) ferulic acid rest during the step-mashing process.

Ferulic acid is a precursor to the production of 4-vinyl-guaiacol (4VG), an aromatic phenol compound closely related to vanillin. 4VG is responsible for beer aromas such as clove, spice and pepper. Sounds great, right? Well, if too much is produced during fermentation then you get a beer that tastes medicinal or like a plaster.

Fruity esters are Important to both styles of wheat beer. They are metabolic byproducts during fermentation. A critical flavour component of any hefeweizen is isoamyl-acetate. It is the ester responsible for the familiar banana character we all know.

The term witbier is Flemish for “white beer”. This Belgian wheat beer style is about as old as its German counterpart. However, the style was completely dead in the 20th century. Pierre Celis resurrected the style in the 1950s and today Hoegaarden Witbier can be found just about anywhere.

Witbiers also have fruity and spice notes but with a larger emphasis on black pepper. The spiciness is much more pungent than with hefeweizens because of added adjuncts to the beer. Most Typical additions are coriander seeds, orange, and bitter orange peel.

It’s not uncommon to see brewers adding cinnamon, chamomile, cumin, nutmeg, grains of paradise or other herbs and spices. Witbiers will also finish quite drier than Weizen as many have a refreshing tart finish. This could be a result of lactic-acid fermentation or a straight-up lactic acid addition during the cellaring process.

The TLDR of the comparison is that hefes build flavour via yeast-driven characteristics while witbier instead enhances flavour by adding herbs and spices.

Here at Sheep in Wolf’s Clothing Brewery, we love good weather as much as anyone. We also know that a proper British summer isn’t guaranteed every year. That’s why we put our heads together to come up with some sunshine in a can!

We wanted to capture the classic flavours of hefeweizen and meld them with the techniques of brewing witbier. We used a classic hefeweizen yeast and added mandarin oil and orange peel. The result is a crisp wheat beer that keeps you coming back for more. Easy Rinder is our citrus wheat beer sure to quench your thirst in any situation–and we mean any situation because this beer is alcohol-free (0.5% ABV). That means it's perfect for a long day out barbecuing or chilling at the beach.

It’s also the perfect refreshment after a sweaty game of seven-a-side or at the end of a hike.

And the best part is you will be able to stay alert, enjoy your evening responsibly, and wake up the next morning with a clear head.

Earlier this year, Easy Rinder was awarded a Gold (one of our four gold medals) at the European Beer Challenge for the full strength Bavarian Hefeweizen Category. Check out our online shop to get yourself a can and sample more of our award-winning beers.


More from: brewing
Back to Our Stories